They reflect light evenly diffusing it into the space with wide viewing angle. The Gain of the diffusion surfaces is very close to 1. The pro- jector installation method (ceiling, table, with optical angle shift) do not change the quality of the picture displayed at the diffusive surface. Matt White, Matt Grey, White Ice fabrics and White Glass panel are diffusion projection surfaces.

They reflect light directionally into the space similar as mirror. Such re- flection characteristics offers higher picture brightness when observed from the direction the light is reflected to, but the viewing angle is limited. Typical Gain values of reflective surfaces are from the range between 1,5 and 3,0. Projection systems with reflective surfaces re- quireesxact positioning of projector, screen and audience. Silver P fab- rics reflective projection surface. 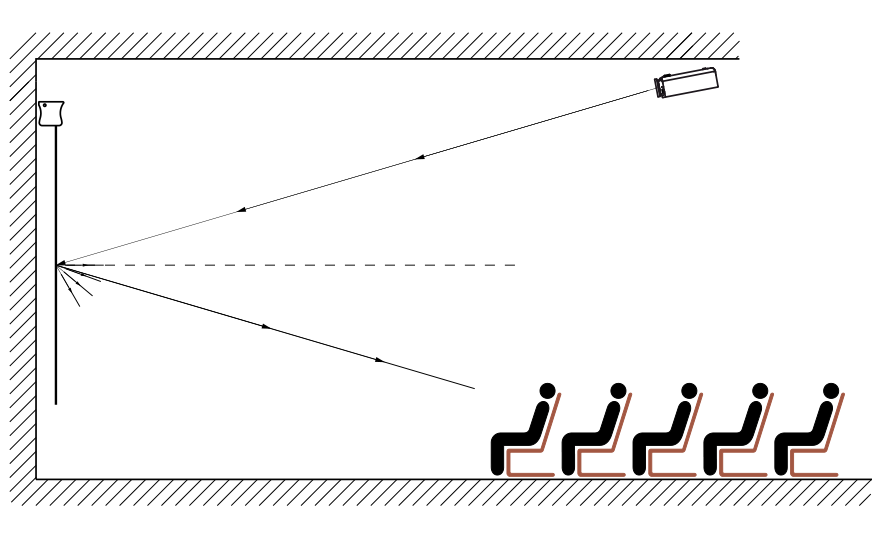 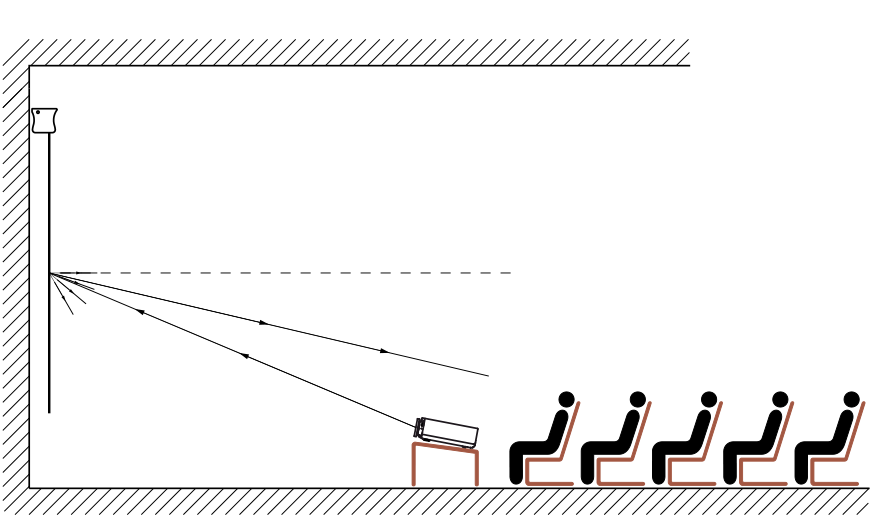 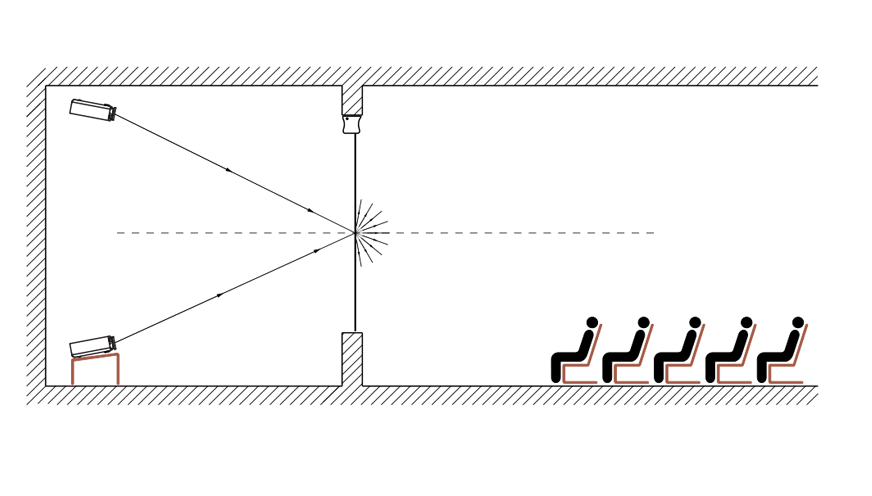 Many years of research work and design activities were taken to invent projection surfaces reflecting light emitted by projector and rejecting rays of light emitted by other sources. Numerous individual solutions were invented as a result, but each of them required a proper projector to be located precisely versus projection screen for proper operation. Individually designed solutions have never been cost effective. 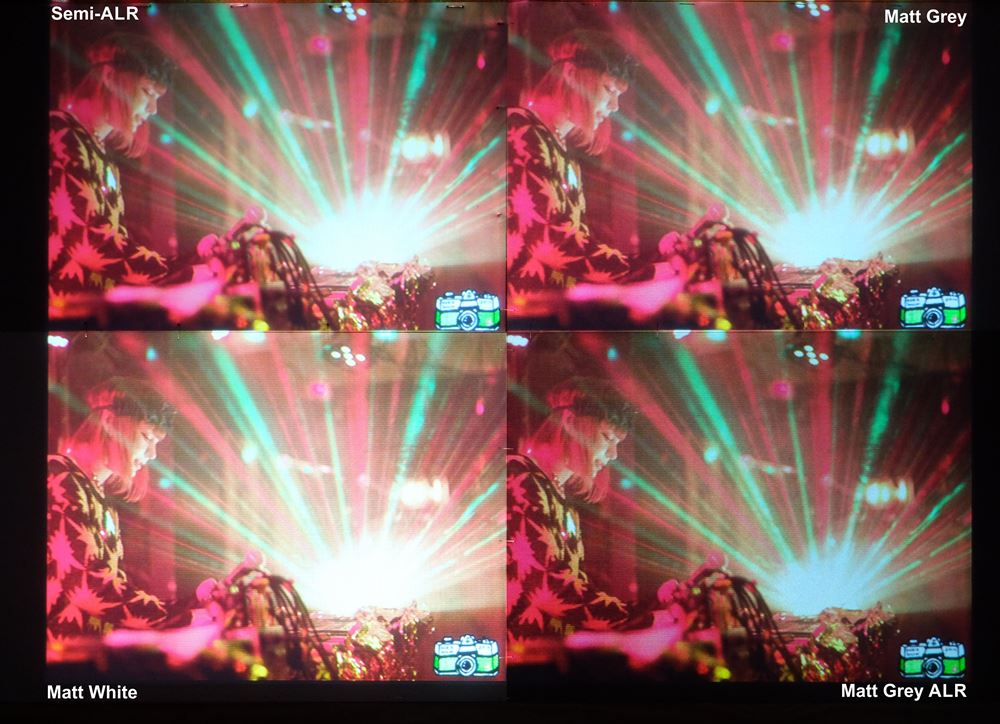 During projection in no ambient light conditions pictures projected at all samples offer correct colour reproduction and brightness related to the Gain value of related projection surface. Our camera has calculated picture exposure parameters for the average brightness level so picture at the Matt White surface area is overexposed, real picture looked correctly and it was 20% brighterthan pictures projected at other surfaces. 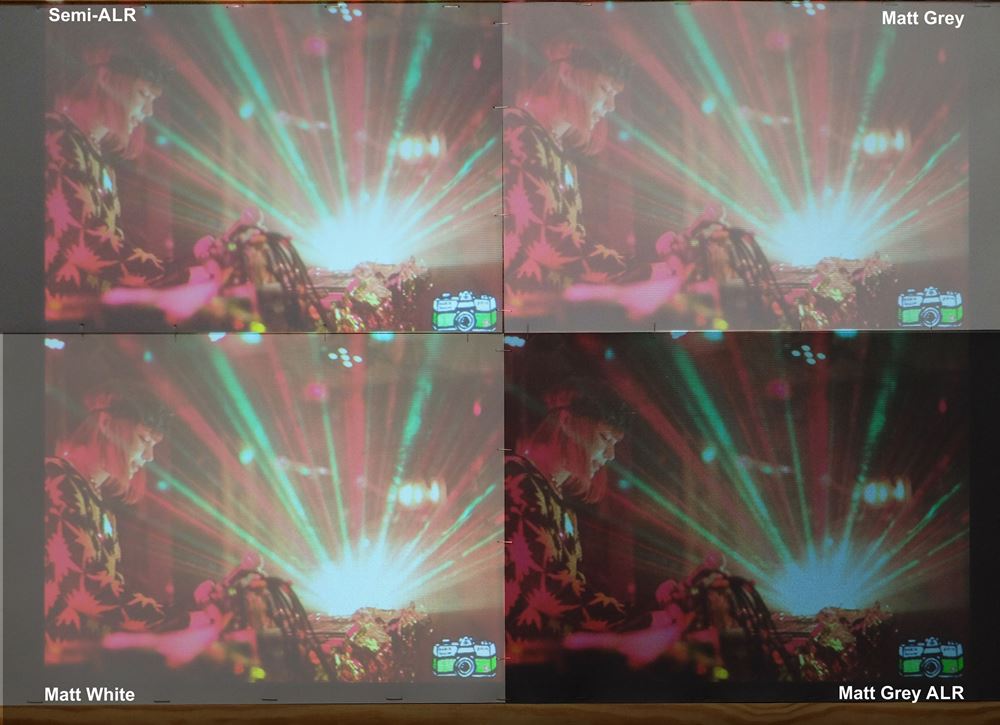 We fairly recommend  Matt Grey ALR projection Surface for the Home Cinema projections. It would  restore content of your slides lost by ambient light conditions during business presentation.

Projection screens should have black borders. It is not just a decorative element, but it improves perception of the projected picture quality. The black border sep-a rates optically the picture from the background and limits viewers attention to the displayed content. The projected picture surrounded with black bordering is recognized as brighter and higher contrast than picture projected at the same surface but without black borders. On top of that the black borders moves the projected image away from the fabrics edges, so any surface flatness imperfections happening at the fabrics side edges will not affect the image quality. Additional black belt over the picture area is required to lower the position of the picture area, so it’s bottom edge would be at the ergonomic height. Additional advantage of the wide top border is reduction of light reflected from the screen to the ceiling and increasing ambient light level at the area.

1) User can scale width of Virtual Black Border just by changing size of projected picture with projector's ZOOM function. Everybody can match width of virtual border with personal feelings.

Picture projection is a picture phenomenon, it seems to be very easy and non prob- lematic. The picture is a result of reflection of the light from the projector and envi- ronment light at the surface of the projection screen. The projection fabrics is the main and most important screen component. Type of projection surface and it’s optical parameters decides about the picture quality and presentation. Fabrics char- acteristics are described with the following parameters: Gain and viewing angle. Relative reflection coeffcient called Gain, describes the amount of light reflected by the surface related to the amount of light reflected by the standard surface. Stand- ard surface is covered either with either magnesium carbonate (MgCO3) either ti- tanium dioxide (TiO2). Both chemical substances are white and they reflect light lossless. Standard fabrics gain is 1.

Viewing angle describes the maximum angle the projected picture could be ob- served without quality decrease. The picture brightness is higher when observed perpendicularly to the surface and decreases with the increase of the viewing angle. The angle, observed picture brightness decreases to 50% of the maximum value is declared as fabrics Viewing Angle. There is close relation between the Viewing angle and Gain parameters. The surfaces with large Gain has Viewing Angle smaller then surfaces with small Gain.

Depending on the light reflection characteristics there are the following pro- jection surfaces: diffusion, reflective, retro-reflective and diffusion-reflective.

There are many types of screens at our offer:

Portable projection screens are recommended if you plan to project pictures at dif- ferent places and in different conditions. In case of fixed screen installation the selection of electric, manually operated or fixed frame screen depends on the user’s individual preferences and planned budget. 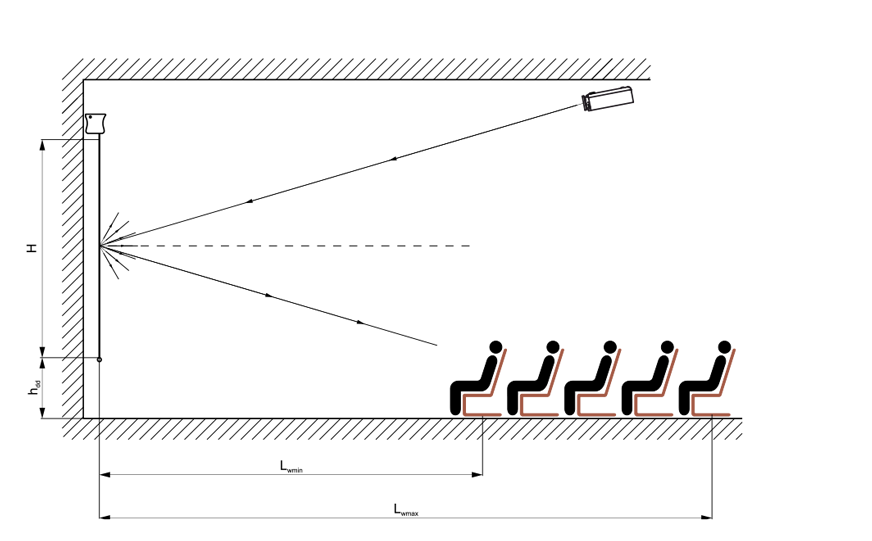 Select the screen size and installation method following the rules described below. - Screens size. Distance between the last row of audience and the screen Lwmax should be multiple of screen height h:

Distance between the first audience row and the screen Lwmin should stay in rela- tion with screen height as well. Lwmin / H > 1,5, Picture width is calculated based on the Picture height and aspect ratio:

The screen should be installed at the ergonomic height, so the viewers could watch the displayed images comfortably.

Screens dedicated for the in-ceiling installation at the recessed ceilings have dedi- cated modular design. There are 2 methods of screen installation depending on the recessed ceiling structure, screen surface is protected from dirt and damage during installation, inspections and maintenance of the installed screen are secured with the screen structure. The screen module and ceiling module remain hidden behind the masking module when the screen is installed. Disassembly of the masking mod- ule can be done by single person. It provides full access to all components of the screen behind.